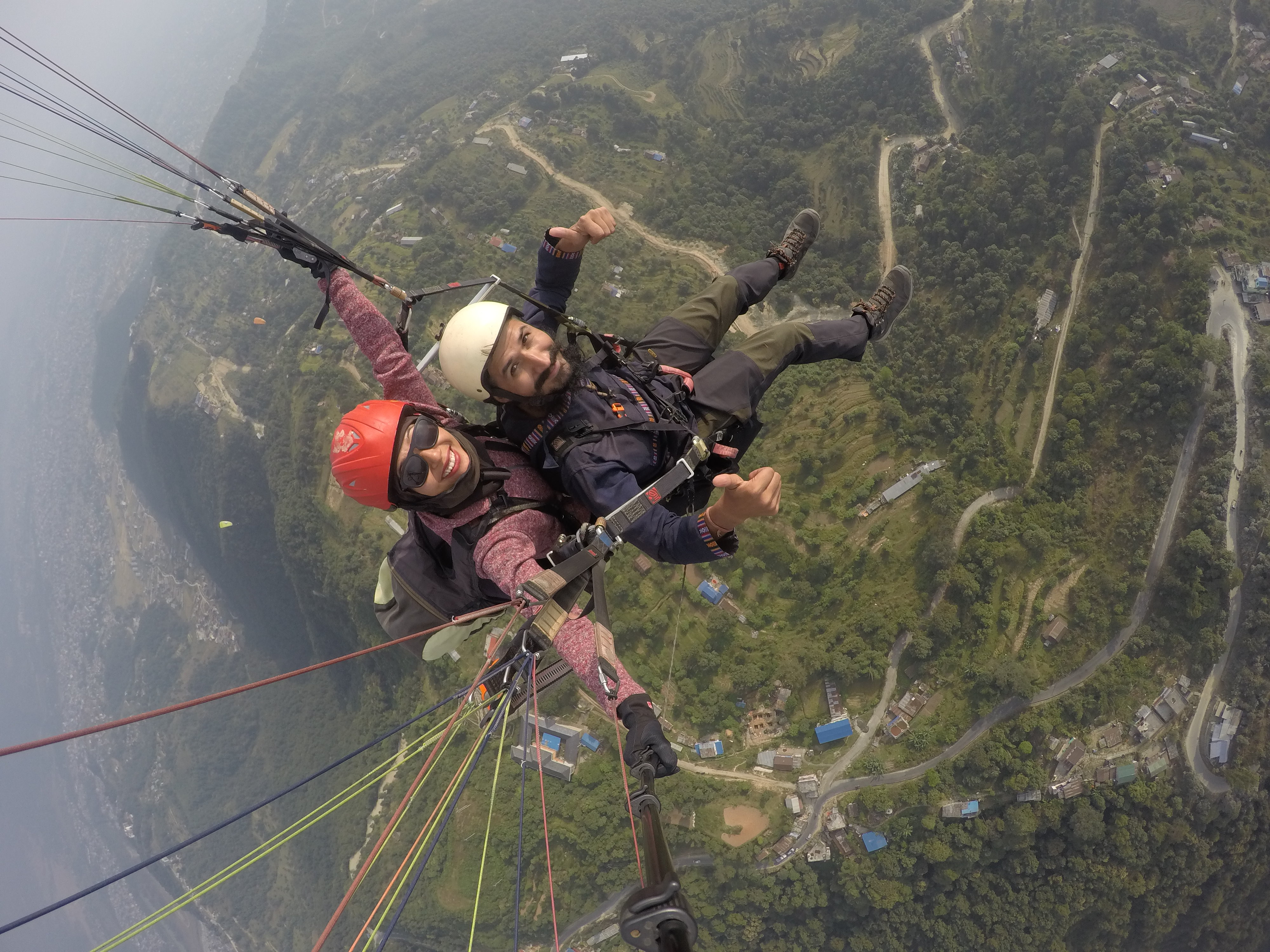 I was in the lake city for once-a-year adventure program of Pokhara skydive on last week of November.  After making my first skydive on 19, November at Pame, I was excited to feel the beauty of Pokhara's  famed paragliding. After enjoying the most expensive adventure sport in the city, paragliding was  my next budget adventure.

Flying in the beautiful skies of Pokhara glancing cute city scenes along with mouth-watering views of Fewa lake was really a once-in-a -lifetime experiment. The picturesque Himalayan range behind was added beauty of my fantastic flight on 20, November. On top of that was my pilot.

Interestingly, her all family is associated with Nepal's paragliding history. Her Husband Mr. Rajesh Bomjan is Nepla's first licensed paragliding pilot. Her father-in-law Biru Bomjan is the first paragliding entrepreneur in Pokhara who set-up first paragliding company named 'Sunrise Paragliding' on the eve of Nepal's first Visit Nepal Year of 1998. 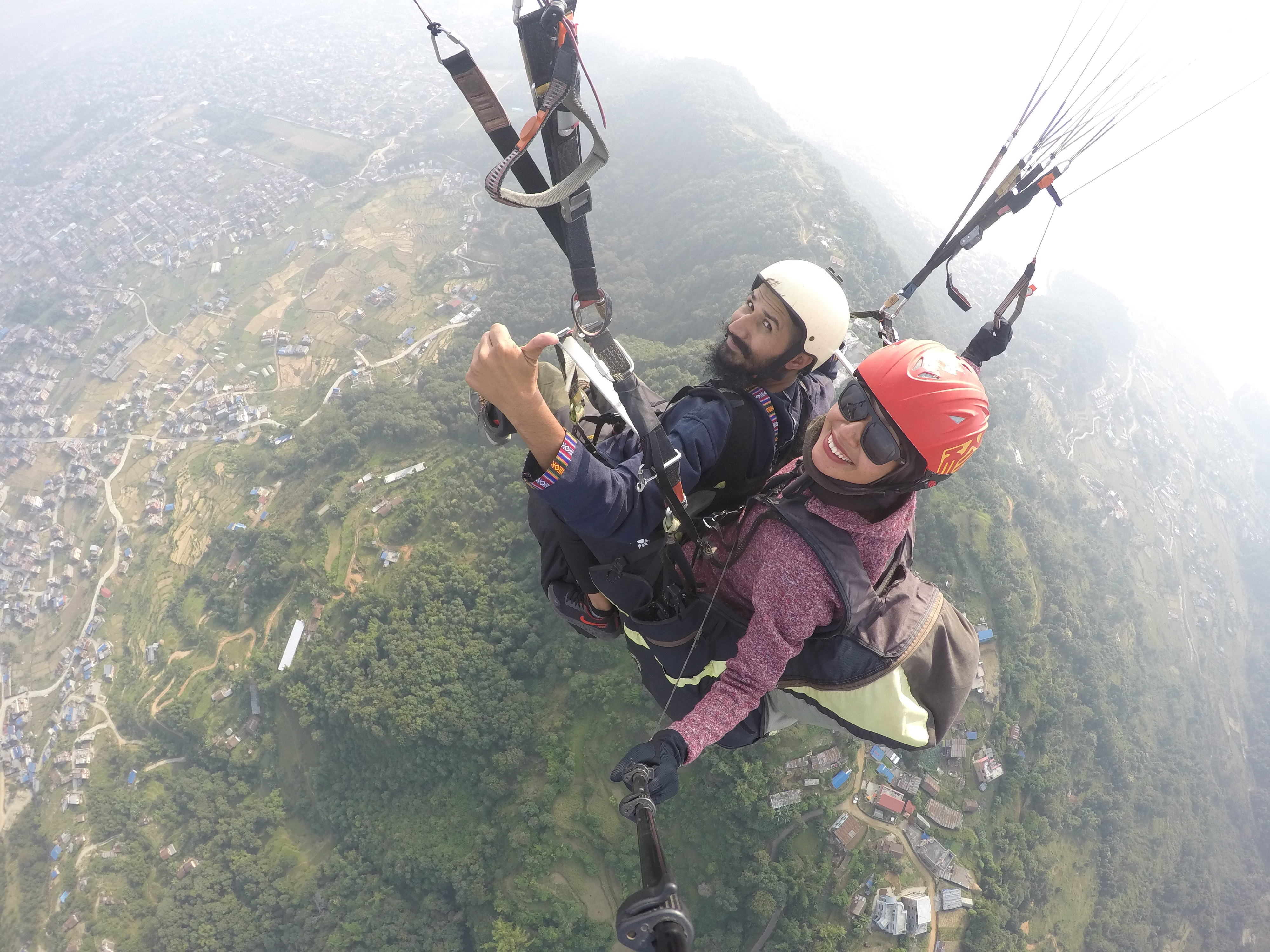 Probably because of her pioneering family of paragliding in Pokhara, Bomjan seemed very professional.  She cancelled our scheduled flight of 11 am in the morning reasoning foggy skies. 'If you were first-timer, I could have flown', she said, 'this is your third time. Therefore, the views must be perfect.'

Finally, the fog stopped enveloping Pokhara in the afternoon. And, our flight was scheduled at 1 pm. She briefed me everything in crystal clear way before our take-off from Sharangkot hilltop situated at an altitude of 1450 meters from sea level.

She strapped my helmet. Arranged seat and harness for me.  'Despite pull from back, you must run forward',  she briefed ,' then only, we can fly easily with our glider.'

Within few seconds of run in the sloppy hills of Sarangkot, we found ourselves in the sky . The glider was blown above us making it easy for us to float in the air.  The blue sky of Pokhara was dotted with dozens of  various colorful gliders.  Nonetheless, Bomjan was single tandem pilot in the crowded gliders in the sky.

She captured our pictures and videos at different locations putting Pokhara city, Sarangkot and Fewa lake in our backdrops.  She piloted our 45-minute-long flight hovering around scenic sky of Pokhara.  Finally, we landed on the shore of the fabulous Fewa lake.

As an adventure-seeker, making paragliding flight was not new for me. I had flown in the skies of Dharan and Bhedetar  On 15, October, 2016. I again soared in the skies of Belaka, Udayapur ,situated on the beautiful bank of  Nepal's biggest river Saptakoshi, on 24 August, 2019.

Having flown twice in wow-worthy paragliding, I was not lucky enough to fly with female pilot. This adventure sport doesn't have much female pilots either.

When it comes to East Nepal, we don't have single commercial female paragliding pilot yet.  Fortunately, I did feel the professional pleasure of paragliding with female pilot while I was in Pokhara on 20, November, 2019.

Having flown for over 12 years as a solo pilot and 6 years' of experience  as a tandem pilot, Bomjan has made hundreds of flights. She has spent thousands of hours in the sky. So is the cause she has no experience of paragliding mishaps.

As Nepal gears up to celebrate Visit Nepal 2020, female pilots like Bomjan must be branded. More and more Bomjan must be produced in other commercial paragliding venues like Dharan , Udayapur and the likes.  Not many adventure seekers are informed about our professional female pilots.

Nepal has less than a dozen tandem female pilots.  All of them must be put at the forefront of Visit Nepal 2020. They can be a symbol of flourishing female adventurers in Nepal attracting more and more female to this beautiful world of adventures. 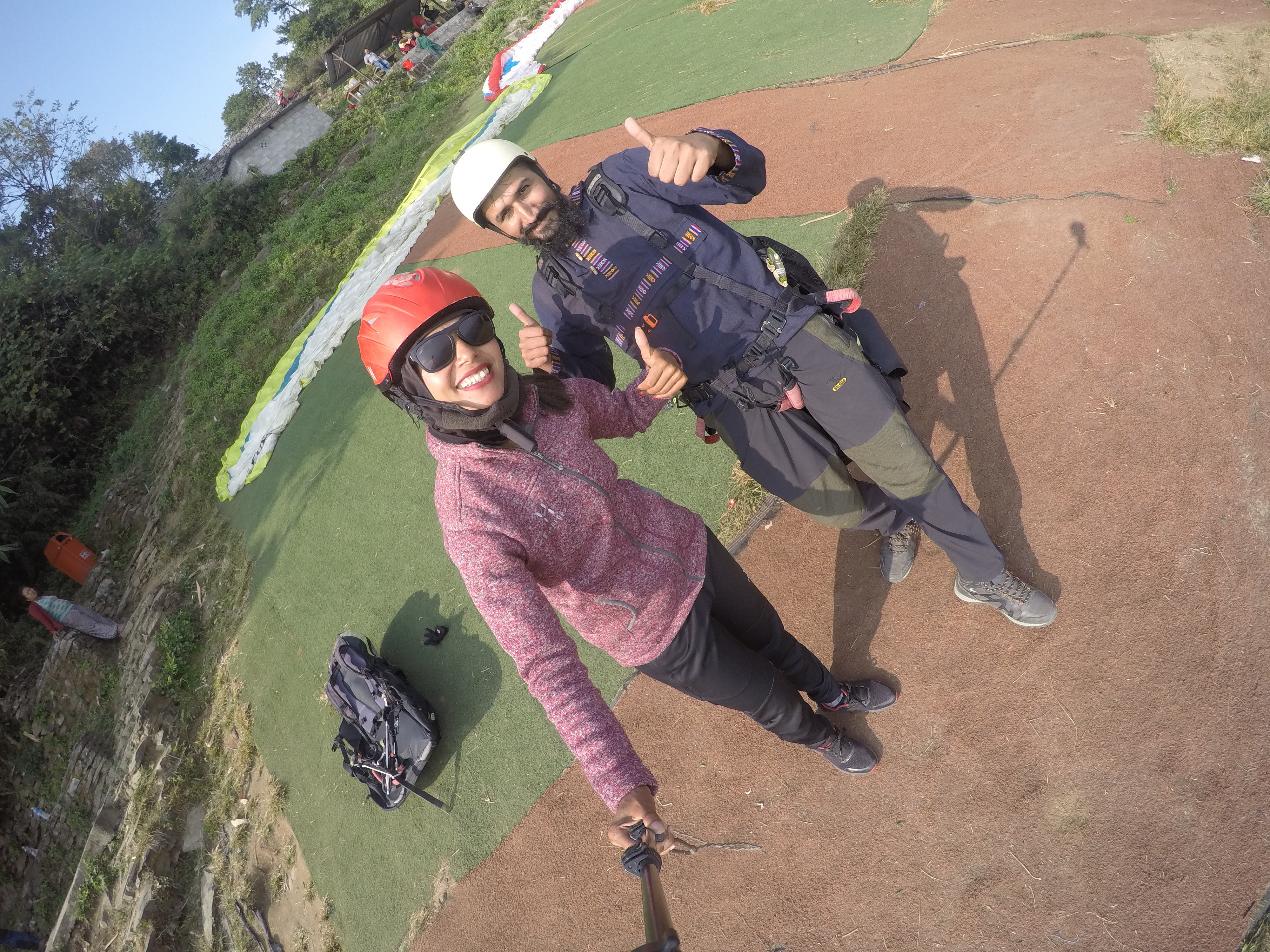 (Originally published in The Rising Nepal on  24 December, 2019)