Palpasa as a Feminist Character 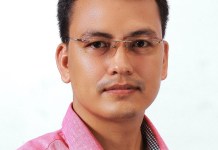 Palpasa is the name of the female protagonist of the novel Palpasa Café written by Narayan Wagle. The story of the novel is told by Drishya, the male protagonist. So, as Palpasa is characterized by another narrator, she has got a scanty limelight throughout the plot. In spite of this, she has appeared as the most impressive woman for the lustful soul of Drishya who is easily disturbed by the beauty of women around him. Moreover, Drishya himself has been presented through the perspective of another narrator (maybe the writer himself) giving the novel a two-fold narrative form. So we see that Palpasa’s real character has been further made vague or possibly misunderstood. Despite this difficulty, this article has attempted the feminist study on her.

The problem of the paper is whether Palpasa is a feminist character or not. The general assumptions and concepts shared by various feminists have been applied for the study of the problem.

According to M. H. Abrams, feminist criticism formally started only after late 1960s (2004,p. 88). For two centuries before that time, many feminist writers had championed the recognition of women’s cultural roles and achievements, and for women’s social and political rights. Since then, it has jumped a great step forward. It is now interrelated with the political movement for social, legal, and cultural freedom and equality.

Virginia Woolf was an important “precursor in feminist criticism” who dared criticize “patriarchal society” (in Abrams, 2004, p. 88) in 1929. Following her footsteps many feminist critics have developed the theory further with many new experimental judgments establishing variety of tenets on feminism. Despite their plurality in theory and procedure, they share certain assumptions and concepts.

Almost all the feminist critics believe that the human civilization from its very beginning has tried “to subordinate women to men in all cultural domains: familial, religious, political, economic, social, legal, and artistic” (Abrams, 2004, p. 89). The feminists think that sex is physical and natural, whereas gender is artificially created and imposed social and political phenomenon. So the concept of masculine and feminine in one’s identity is generated by the pervasive patriarchal biases of our civilization. Abrams writes, “The masculine in our culture has come to be widely identified as active, dominating, adventurous, rational, creative; the feminine, by systematic opposition to such traits, has come to be identified as passive, acquiescent, timid, emotional, and conventional” (2004, p. 89). It shows the society’s cultural bias against women.

Palpasa is different from traditional Nepali women. She is a well-educated modern girl who knows well about the western life style.

Palpasa is a girl with frankness. She tells Drishya that she hopes her frankness doesn’t offend him. In fact, she expresses her notions without any hesitation. Her eloquence shown in the conversation with Drishya justifies this argument. She is so frank that she even admits her past relationships with other men easily when she was in America. After Drishya has expressed his love to Palpasa indirectly through a letter written to her grandmother, she really falls in love with him. Unfortunately, Drishya has to go to the village and remains out of contact for many days. The following anxiety causes her to write and leave a letter for Drishya in the hands of her grandmother. In the letter she admits that she had a few relationships in America, but she has only the memory of them now.

Not only her frankness but also her habit of drinking wine with male friends at public places puts her ahead of the traditional feminine women with “fraility, modesty, and timidity” (Tyson, 2006, p. 87). She is bold enough to leave her friends and come to join Drishya when she finds him drinking alone on the veranda of a hotel at Goa. Drishya seems to be a bit surprised to see her order a glass of wine. Later again, Palpasa comes to Drishya’s party for the opening of his gallery and openly drinks wine with his friends. Drishya takes a bottle over to Palpasa and offers the drink. She silently allows him to pour more wine into her glass. Perhaps her drinking habit developed after the end of her former relationship. It might have developed a different attitude in her to look at men. It appears in her letter to Drishya in which she requests him not to think that she is “an object for others” (Wagle, 2008, p. 24).

Palpasa claims that she is an optimist girl. She has a few dreams. She wants “to do something meaningful and make something” of herself (Wagle, 2008, p. 192). Not only with Drishya but also among her friends she has expressed her determination. Her friend Gemini who has come to Nepal from America looking for her after her death says

She told us she wanted to do something meaningful with her life. We didn’t know what she was planning to do but she looked very determined. She left so many friends back in the States. She made both male and female friends, you know. She treated everyone well and wanted to be treated well in return (Wagle, 2008, p. 237).

It shows that Palpasa can sacrifice anything for equality and freedom. It means that she is against the values of “patriarchal femininity and domesticity” (Tyson, 2006, p. 93) like modesty, humbleness, and self-sacrifice.

This is the reason why she left America and came to Kathmandu. She doesn’t want to go back to America. She wants to become a documentary film maker so that she can enjoy her freedom and creativity.

Palpasa is such a revolting figure that she even differs from her same age friends in the matter of freedom and relationships. Once she is criticized by one of her friends for talking to an unknown man from outside the capital, but she is not satisfied with her friend’s disapproval and scolding. She thinks no one should tell her whom she should or shouldn’t talk to.

Once she angrily blames on Drishya that he doesn’t see her as his equal. Her demand for equal treatment shows that she doesn’t accept inferiority or subordination.

Palpasa’s strong feminist ideal is revealed to its highest when she blames Drishya of being a male chauvinist. She says that his idea of what makes a woman happy comes from his “sexist preconceptions” and that he has “never tried to understand the real” her (Wagle, 2008, p. 199).

This is a serious blow to the priest of beauty, the painter protagonist. When Palpasa complains that he has never talked to her on serious matters but always compliments on the way she dresses to impress her, Drishya cannot defend his speech properly. She says he thinks all women love to get compliments on their appearance. Her attack is directed towards not only Drishya but also other men who think women like to be praised of their beauty.

Though in the beginning of the novel Palpasa seems to be a bit frustrated and submissive, she gradually develops herself as a more determined character. We can take her two letters for example. Her first letter to Drishya, after they meet at Goa reveals her confusion and semi-consciousness as a feminist. She says that she identifies herself with the female figure in Drishya’s painting ‘Rain’. Moreover, she feels like the long yellow leaf of a painting which is falling continuously but never touches the ground. She says

I feel like that leaf. You’ve made me that yellow leaf which continuously falls and falls, never finding a place to rest. I want to stop falling. I want to stand up and fight my inner battles on solid ground (Wagle, 2008, p. 28).

When Drishya suddenly disappears and reaches out of contact, she feels Drishya is trying to avoid her. So she writes in her second letter that she is also leaving him. She has taken the decision to begin her work because she wants to blossom like a flower. She writes that she is not “a girl who can just remain passive” (Wagle, 2008, p. 194).

This, of course, is a clear indication that she is determined to show her actions to establish herself with strong role in the traditional patriarchal society.

Palpasa believes on the gender equality and individual freedom. Frankness, boldness and entrepreneurship are her qualities. She has such untraditional traits (like: drinking wine at public places, roaming around freely, etc.) that show her disregard towards traditional feminine stereotypes. Therefore, we can say that Palpasa is a strong and typical feminist character.