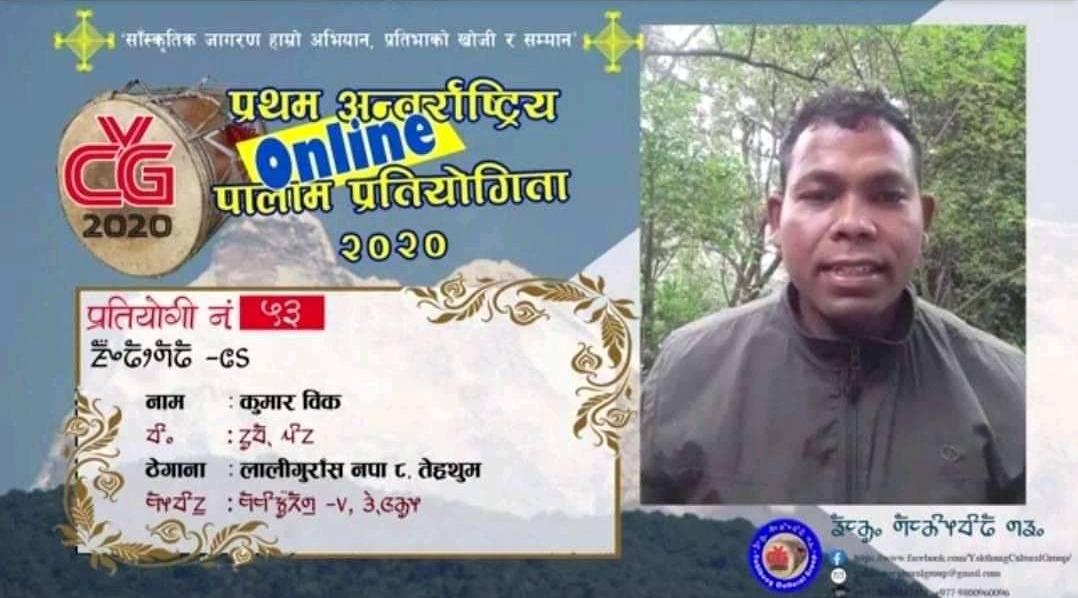 A non-Limbu youth, Kumar, proceeds and starts singing ‘Palam’. Palam is an incredible musical heritage of indigenous Limbu communities of Nepal, which is sung by people of all ages. He sings Palam for around five minutes.

Gopal Dahal, who is originally from Limbu heartland of Pauthak of Tehrathum, says he is more than happy to sing Palam. ”I used to sing Palam at times since my childhood in Tehrathum,” says Dahal, who now lives in Biratchowk of Morang district. He adds, ”Palam competition has made me nostalgic and happy together.”

Organized by Yakthung Cultural Group, the pioneering worldwide online Palam competition has won hearts and minds of many. Sita Tumkhewa, the co-coordinator of the event is excited with the huge outpouring of support both from Limbu and non-Limbu communities. The easy methods of recording and sending online for competition have made it easier for participants.

”All members of the Yakthung Cultural Group discussed a lot about possible ways to cultural reawakening and preservation of the vanishing Palam heritage of the Yakthung (Limbu) community,” says Tumkhewa, the award-winning poet of Satako Shahitya which was awarded to outstanding among the poems published from August 2018 to July 2019 from an Australia-based poetry portal of satakosahitya.com. She adds, ”We did so to suit both the technology of this times and the crisis of the global pandemic.”

The first, second and third prize will be announced on August 6, informs Tumkhewa. The prize of the top three winners, she says, is Rs 50 thousand, 40 thousand and 30 thousand respectively along with various gift hampers and certificate.

Sagar Sargam Chemjong, the President of Free Student Union of the Dharan-based Mahendra Multiple Campus and the admirer of this competition, says the competition has empowered the cultural awakening of the State-1.

”To see participants from Limbu, Rai, Brahmin, BK, Newar, Magar to various faiths of Hindu, Kirat, Yuma, Buddhism and even by Christian is not an ordinary affair,” shares Chemjong. He adds, ”Despite different weakness, we are in the march towards cultural reawakening and formation of our cultural capital for new generation.”

Sita Tumkhewa, the coordinator, says archiving will make it easier for upcoming generations to be informed about Palam. ”Because of globalization and mass migration, the typical Palam of Limbu communities has reduced to some experienced and senior citizens of our community,” informed Tumkhewa, ”Once we make strong online archives, this would be accessible to all from all around the world.” Thumkhewa says this will also act as a connecting factor for the cultural unity and uniformity of Limbu community of Nepal.

Amit Yakthungba Mihaang, a member of the Yakthung Cultural Group living in United Kingdom, says the entire competition package is driven and funded by community members. ”We have not taken even a fraction of the budget to run this innovative cultural competition of Palam,” says Amit, adding, ”This is another beautiful aspect of this competition.”

Based on the ten-yearly census of 2011, State-1 has 106 spoken languages as mother tongues. Limbu language ranks in top three positions after Nepali and Maithili with total speakers of 331,685. This is roughly the 7.4 percentage of 4.5 million population of the state.

Nonetheless, the Limbu language and its cultural influences to the other communities is strong, say popular Nepali poet Dewan Kirati who is married to a Limbu woman.

”In eastern hills of Nepal where Limbu indigenous people are living for centuries, Limbu language and culture has influences on various other languages and communities,” says Kirati. He adds, ”Various cultural activities and competition like Worldwide Online Palam Competition has proven this influence and cross-cultural bond in State-1.”